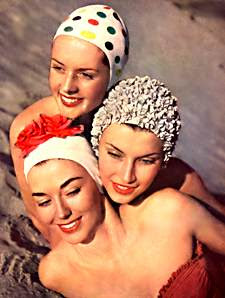 Manolo laments the end of the overshoe. "Manolo asks, ubi sunt the clear plastic overshoes worn by the stylish ladies of the not-too-distant rainy past?"

I'd say I was born at the end of the era of the galosh. We wore galoshes as children and they were awful. It took forever to get the rubber boot up over your shoe and then there was a mighty struggle in the school cloakroom to get them back off. A friend would pull while you braced yourself by holding onto the bench. After much tugging, the galosh and the shoe it was protecting would come off and you had to spend another few minutes digging your shoe out from the galosh's rubber embrace. You had to take them off, because your feet would be swimming in a pool of sweat if you left them on. As I recall, my sister and I fought bitterly with my mother about wearing them.

Still, galoshes were the province of children and little old ladies, whom I remember wearing galoshes like the ones on the left. They also wore plastic rain caps. But no one else did. My mother, for example, didn't. And now that she qualifies as a little old lady she still doesn't. Galoshes went the way of decorative rubber bathing caps, which my mother did wear, but which didn't really keep your hairdo intact--their ostensible reason for being.
Posted by Rachel at 8:57 AM